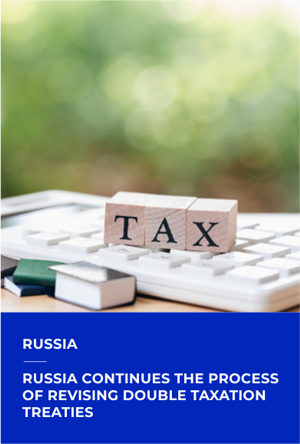 On March 25, during a televised address Russian President Vladimir Putin mentioned that a revision with the Double Taxation Treaties (hereinafter – the “Treatу / Treaties”) with those jurisdictions would be required which are used for the inadequate transfer of income from Russia.

We have already reported earlier that Russia offered Cyprus, Malta, and Luxembourg to review the existing Treaties. According to the proposed amendments, dividends and interest paid to companies from these countries would be taxed on income of foreign legal entities at the rate of 15%.

Cyprus, Malta and Luxembourg have agreed to Russia’s proposals, and the new rates are likely to come into effect next year.

In addition, Russia has sent a similar proposal to the Netherlands to revise the Treaty.

We are monitoring the situation and will inform you about changes in a timely manner. Our tax experts will be able to advise you on emerging issues. In our opinion, at this stage it would be advisable to: