Russia has begun the process of reviewing its Double Taxation Treaties 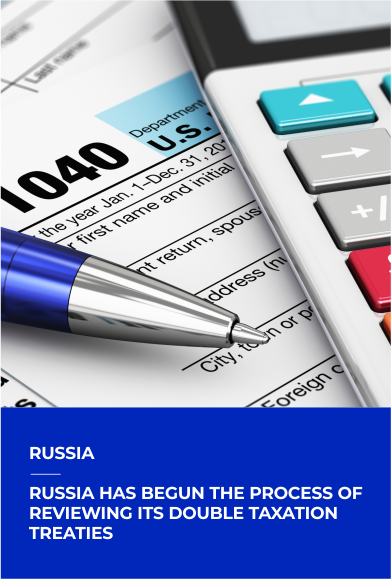 On March 25, during a televised address, Russian President Vladimir Putin announced the need to revise the Double Taxation Treaties (hereinafter – the Treaties) with jurisdictions that are used to transfer income received in Russia abroad.

The essence of the proposed changes

In order to implement this measure, the Russian Ministry of Finance sent a proposal to the Ministries of Finance of Cyprus, Malta and Luxembourg to revise the provisions of the Treaties  between Russia and these countries in April 2020.

In particular, it is proposed to set the rate of withholding tax on profits of foreign organizations on interest and dividends at 15%.

In the table below, we provide an analysis of the current and proposed rates.

Will rates on other income be revised?

It should be noted that the tax on other passive income is not mentioned. Thus, payment of royalties, income from international transportation, rent, and other types of income in the jurisdictions under consideration will still not be taxed in the Russian Federation if the provisions of the Treaties are applied.

There are no plans to change the interest income rates payable on Eurobonds, bond issues of Russian companies, or loans provided by foreign banks.

When will the changes come into force?

The Russian Ministry of Finance asked the Ministries of Finance of Cyprus, Malta, and Luxembourg to give an answer and warned that the Treaties can be unilaterally terminated.

If the countries agree with the proposal, the amendments will enter into force on January 1, 2021. If these countries refuse, and if Russia terminates the Treaties, the rates provided by Russian law will also be applied from January 1, 2021.

In any case, the new tax rates will not be applied to payments made in 2020.

Will the changes affect  the payments to other countries?

According to the information placed on the website of the Ministry of Finance, the changes will affect the so-called “transit” jurisdictions. Experts name such countries as the Netherlands, Switzerland, and Ireland among the next candidates. So far, the Russian Ministry of Finance has not sent proposals for revision of the Treaties to these countries.

What consequences will it have for business?

We believe that the measures under consideration will lead to an increase in the tax burden for companies headquartered in these countries. It should be noted that if a company in these jurisdictions was used as a transit one and had not been considered as a beneficial owner of income, the tax authorities had successfully challenged the application of reduced tax rates, applying the concepts of “beneficial ownership on income” and “unjustified tax benefit”.

Now the increased rates will be applied even if the foreign company conducts real economic activity in the country of incorporation.

We are following the developments and will inform you about them. Experts from the tax practice will be able to advise you on any questions that may arise. In our opinion, at this stage it is advisable to: