Ulf Schneider: “Many German companies do not even know where Belarus is located” 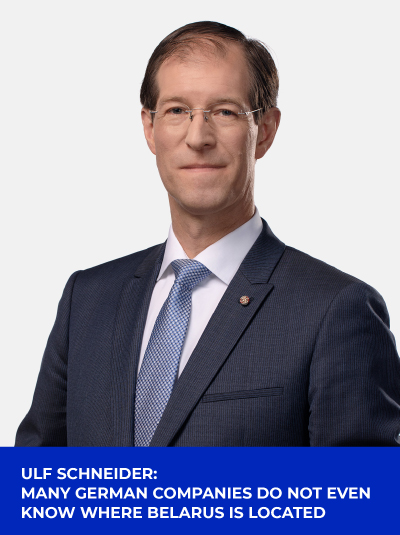 Even before the disorder began, Belarus was considered an unattractive place for foreign companies’ business. This is unreasonable, says Ulf Schneider, who helps companies to enter the Belarusian market, in a conversation about Belarusian business culture.

Ulf Schneider founded SCHNEIDER GROUP in Moscow in 2003. His consulting company specializes in consulting Western European companies as they enter the Eastern European and the CIS markets. In 2009, his group of companies opened a branch in Minsk, and since that moment has been advising foreign companies there as well. Obviously, business is in demand, because with a fairly deep integration of the state and the economy, foreign companies often face administrative, bureaucratic, or cultural barriers.

WirtschaftsWoche: You have been working in Belarus for over ten years and help foreign companies to establish themselves in this market. How have the starting conditions for the work of Western companies changed over this period of time?

Lukashenko has done several positive things in recent years, primarily in the field of foreign policy. For example, he introduced a 30-day visa-free regime, which is a very important benefit especially for business travelers. In addition, he reduced bureaucracy and simplified administrative procedures. This helped foreign companies to set up their business in Belarus. Benefits are especially relevant for the IT sector. Of course, this does not justify the way he now behaves with his own citizens.
In addition, active reforms practically stopped about a year ago. This could also be the cause of public discontent. However, young people do not seem to care about economic improvements, they care about freedom the most.

When your company was set up in Belarus in 2009, the conditions for doing business for Western companies there were considered difficult. Bureaucracy, corruption, and the economy tightly regulated by the state: that was the general idea about Belarus. How did you see potential there, despite these factors?

There was something like a gold rush then—ideas for business seemed to be lying underfoot. It was only necessary to implement them correctly. Belarus offered excellent business opportunities to foreign companies, but it did not position itself very well in the global economy. I was sure that the country would develop well and, in addition, being located between the EU and Russia, it could be a good place to produce goods and export them to Russian-speaking countries. The reason is not only in qualified personnel or relatively low salaries: Belarusians are very similar to us as Germans. As employees, they are distinguished by discipline, punctuality, and accuracy, for example.

However, until now, relatively few German companies operate in Belarus. What is the reason for this?

Many German companies do not even know where Belarus is located. Many also believe that the situation in the country with a president like Lukashenko can lead to problems – this is understandable. But the widespread opinion that there are no economic opportunities in the country, from my point of view, is unjustified. However, companies need someone to help them enter the market and understand local specifics. Otherwise, administrative barriers or cultural differences will hinder success. It will be very difficult for anyone who does not know Belarusian methods of doing business.

What is different, for example, from doing business in Germany?

For example, negotiations with potential business partners. We Germans usually fly somewhere for a day or two, discuss the contract and, as soon as it’s ready to be signed, we return home. This is not the case in Belarus. There you cannot be sure to conclude a contract if you leave immediately after negotiations.

This is due to cultural differences. If a German says that the contract is ready and leaves, Belarusians will perceive this as disrespect to the partner. You need to take time to at least go to the theater or a concert together. And if your future partner invites you home, it means that the relationship is really strong. It is impossible to say exactly how long the visit will last. But the correct answer that needs to be given to the question about the date of return is “When we will finally agree.” In no case can you name the exact date.

If you remember all this, will business in Belarus go as it should?

It is not so easy – bureaucracy is deeply rooted in Belarus, and the administration is in no hurry to make decisions. If it seems to us that the documents can already be signed, the administration thinks differently. It is the conclusion of contracts between two enterprises that can last for quite a long time. Patience is needed here.

Compared to the current problems in Belarus, these difficulties seem insignificant. Hundreds of thousands of people oppose Lukashenko, and he responds with acts of violence. Could the country have a future with such a president?

For decades Lukashenko has been suppressing the development of the opposition. Therefore, I am not sure that such an opposition is able to create a government that takes into account the interests of all segments of society. It is very difficult to say who would have won the elections if they had been free and objective. Obviously, economic improvements are not enough to meet the demands of the citizens. We need an open dialogue between the president and the people. After all, there are supporters of both the opposition and the functioning government in Belarus.