Further steps in the harmonization of value-added tax rates, transport, customs, and pharmaceutical market regulations in the EU and the EAEU were discussed at the Lisbon-Vladivostok roundtable in Moscow 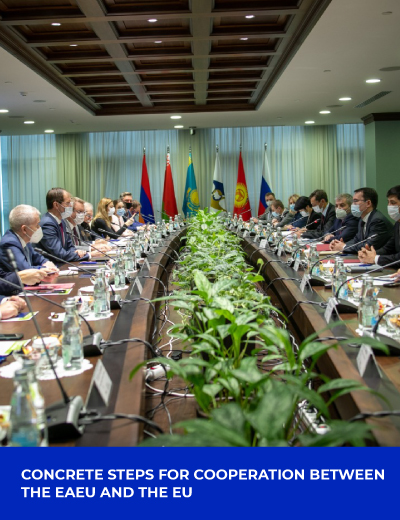 On November 16th, 2020, Ulf Schneider, President & Founder of SCHNEIDER GROUP, moderated the round-table discussion of the Lisbon-Vladivostok initiative “Concrete steps for cooperation between the EAEU and the EU”. Identification of low-threshold practical common projects for the EU and the EAEU was the focus of this year’s event.

The business-led Initiative for a common economic space from Lisbon to Vladivostok (L2V) was launched five years ago. The aim of the Initiative is to identify ways to reduce of trade restrictions, standardize regulations, and promote of dialogue between the Commissions of the European Union (EU) and the Eurasian Economic Union (EAEU).

Beginning November 2020, the Initiative got another major push with the establishment of the international executive board with members from Austria, Belarus, France, Germany, Italy, and Russia. Ulf Schneider was elected Chairman of the Board.

On November 16, upon the invitation of Timur Zhaxylykov, the Minister for the Economy of the EAEU Commission, the Initiative met with expert representatives of the commissions from Brussels and Moscow for a roundtable discussion to identify low-threshold joint practical projects in VAT, pharma, finance, transport, and customs regulations.

“The Coronavirus crisis has just shown us how valuable international cooperation is,” comments Ulf Schneider, “Despite all current political obstacles, we must not lose sight of a common economic space from Lisbon to Vladivostok. Only if we improve cooperation on our continent can we survive the fierce competition with the USA and China. We should now take the first steps on this long road and organize a dialogue between the EU and the Eurasian Economic Union. We can now ensure common rules for the major future topics of Green Deal and digitization Even in politically difficult times, business has a responsibility to keep doors open for dialogue. We will approach both commissions with very concrete proposals in the spirit of common norms and standards”.

On the agenda of the Initiative is the harmonization, or mutual recognition, of standards in the fields of value-added tax, transport, customs, the pharmaceutical market, the financial market, and digitization and cooperation in the field of climate and nature protection (“Green Deal”).

Since 2015, the Initiative has been working to establish an official dialogue between the European Union (EU) and the Eurasian Economic Union (EAEU). The EAEU is an economic alliance founded in 2014 by the states of Armenia, Belarus, Kazakhstan, Kyrgyzstan, and Russia. The economic area represents a promising market with the population of 183 million, which is one third of the total population of the EU.