There will be no continuing tax crimes. What are other problems? 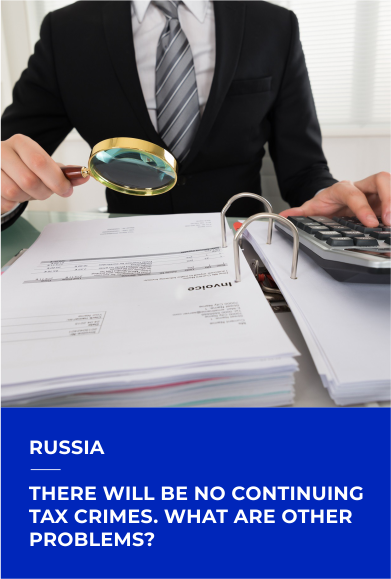 On November 26, 2019, the Plenum of the Supreme Court of the Russian Federation (the RF SC) finally adopted a Resolution on tax crimes.

The Plenum of the RF SC removed the concept of continuing crimes from the resolution on tax crimes. The previously adopted draft provided for the introduction of the concept of “continuing crime”, which made it possible to hold businesses accountable for an unlimited period of time. Now that the draft is returning to the previously existing interpretation, defining liability for a tax crime that has been committed tax crime within the previous 10 years. This introduction provoked a positive response from businesses. However, there are still disturbing innovations in the draft.

The circle of responsible persons has been expanded

The draft resolution broadens the circle of responsible persons that may be held criminally liable.
The subject of a crime can be any physical person that performed the representative function in tax affairs, since the taxpayer has the right to participate in such affairs via a legal or an authorized representative, as well as the person who organized the crime, according to art. 199 of the RF Criminal Code or induced a manager (an authorized representative of the company) to commit it.

In the current version of the Resolution of December 28, 2006, N 64, only persons responsible for ensuring timely payment of taxes and the provision of relevant reporting documentation can be classified as perpetrators of a crime. This includes the taxpaying company’s director, the chief accountant (or an accountant in the absence of a chief accountant position) and other persons authorized by the company management to perform such actions.

Background of the problem

In the summer of 2019, the Plenum of the RF SC presented the first draft of the Resolution. In the Draft, the tax crime was proposed to be considered as continuing until the guilty legal entity paid all the arrears of taxes, fees and insurance payments. This de facto situation would mean the possibility of pronouncing a legal entity liable for a crime even after 10 years from the date of a tax non-payment.
The draft caused a lot of discontent and concerns from the business community. According to representatives of the business community, the statute of limitations should be calculated from the date of non-payment, and the recognition of these crimes as continuing means that they can be prosecuted for an unlimited period of time.

SCHNEIDER GROUP tax experts can analyze the existing business structure to identify tax risks and, based on the results, propose alternative business options that meet the requirements of the legislation.