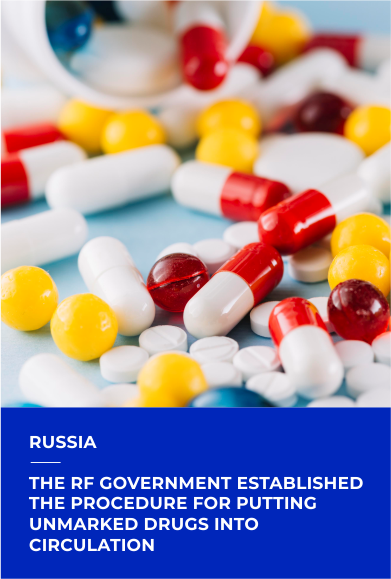 The peculiarities of putting into circulation / importing into the RF (respectively), established by Decree No. 955, apply to:

Decree No. 995 does not apply to drugs belonging to the group of high-cost nosologies, which are already marked from January 1, 2020 on a mandatory basis.

Putting into circulation / release by the customs authorities of drugs imported into the RF is carried out on the basis of individual approval of the Federal Service for Supervision in Healthcare (Roszdravnadzor), issued upon application. The application, among other things, must contain an indication of the production sites and the addresses of the places of the drug manufacture, as well as the number of units of the drug declared for import into the RF or putting into circulation. The participant of the monitoring system must attach to the application the following documents characterizing the individual circumstances in connection with which the approval is requested, including:

The decision to issue / refuse the approval will be made by a special interdepartmental commission of Roszdravnadzor. Preparation of approval / refusal will take up to 10 business days from the date of receipt of the application with the package of necessary documents by Roszdravnadzor. The approval is issued free of charge for a period of 45 calendar days.

Decree No. 955 provides for the creation of an open and public register of approvals in the Internet, in which information on the issued approvals for the putting into circulation / import of unmarked drugs into the RF is published.

Unmarked drugs put into circulation / imported into the RF on the basis of the approval procedure established by Decree No. 955 are subject to circulation until the end of their shelf life.