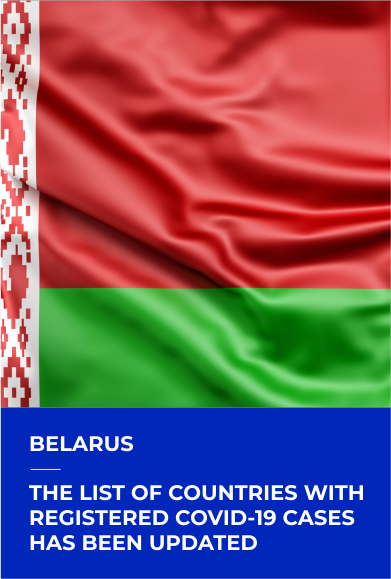 Firstly, on June 11, 2020 the Ministry of Healthcare of Belarus excluded the following countries from the list of those, where COVID-19 cases were registered. Later, on June 25, 2020, 14 countries were excluded additionally. Therefore, persons arriving in Belarus from the below mentioned countries do not have to be on self-isolation during 14 days from their arrival to Belarus and to follow self-isolation rules.

The list earlier included 169 states, where the cases of COVID-19 infection were registered. It is worth mentioning that the list published on the official website of the Ministry of Healthcare of Belarus is constantly being updated and further amendments can also take place considering the epidemiological situation and the measures taken by the governments of foreign countries.

Herewith, foreign citizens arriving in Belarus should have negative results of polymerase chain reaction diagnostics conducted not later than 2 days before their arrival in Belarus, when they cross the state border of Belarus, according to the press-service of the Ministry of Healthcare of Belarus. Earlier such a requirement was not set. When the arriving persons cross the state border of Belarus, their temperature is measured with a thermovision camera or a non-contact thermometer and they are asked about their health condition.

We hope you find this newsletter useful. SCHNEIDER GROUP is ready to provide professional support in our countries. We contribute our experience and knowledge to the growth of your business. Should you have any questions or would like our assistance in Belarus, please contact our experts.