The address of the President of Russia — what will happen to businesses? 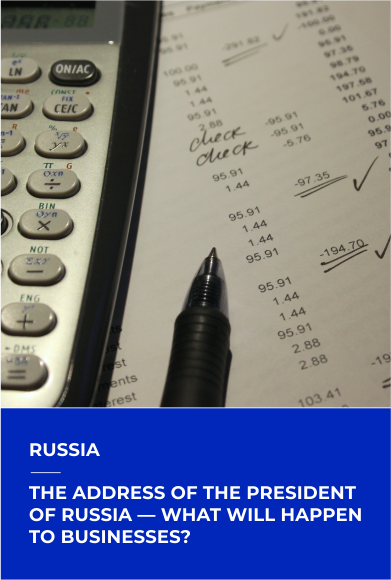 On March 25, 2020, Russian President Vladimir Vladimirovich Putin addressed the Russians about the crisis situation related to the spread of the new coronavirus infection.

In addition to introducing a non-working week from March 30 to April 3 for most Russians, the President announced a number of measures aimed at easing the tax burden on business and helping them survive the current crisis. Experts of SCHENIDER GROUPS’s tax practice comment on the measures of the President below.

Granting deferred payment of all taxes excluding VAT to small and medium-sized (SME) business for the next 6 months, and for micro-enterprises — for payment of social contributions in addition

Previously, such a measure was announced by the Government for companies operating in the field of tourism and air transport, as well as in the field of physical culture and sport, art, culture, and cinema, and it was planned to introduce it by May 1, 2020. For this purpose, the Ministry of Finance was instructed to draft a federal law. In fact, this measure will mean that the tax authorities will not send claims for payment of taxes and send decisions on the collection of taxes and social contributions, and on the amount of debt will not be charged penalties.

Due to the fact that next week March 30, 2020 through April 3, 2020 was announced as non-working days, following the Tax Code of the Russian Federation all the tax deadlines falling on this week will be transferred on the first working day following after these days.

This is related to Profit Tax Returns for 2019 and Year Ended Accounting Reporting.

However, in order to avoid any negative consequences, we recommend to file returns and reporting forms electronically (in electronic format) or on paper within the officially established deadlines.

This measure was necessary to support SME, as many industries are affected by the current situation and many companies are forced to suspend their operations without making profits but still serving their obligations. However, in order to adjust their budgets it is necessary to wait for clarification whether all SME will be able to receive the suspension, or whether they must meet certain criteria, have suspended operations, or have certain financial results within a specified period.

Earlier this measure was announced by the Government and it was proposed to introduce it until May 1, 2020. It will mean that if a company is on the verge of bankruptcy due to inability to pay taxes and social contributions, the tax authority will not be able to file an application for bankruptcy of such company. It can be assumed that this will not apply to all companies, but to companies that are in difficulty, that operate in tourism and air transport, that operate in the fields of physical culture and sports, art, culture and film, or that only SME are involved. The Government has been instructed to expand the list of industries if necessary.

Implementation of this measure will require amendments to the Tax Code. Most likely, this measure will not apply to all organizations, as well as to those belonging to SME and those working in the abovementioned sectors. Moreover, this measure is introduced for an indefinite period of time, which, in the opinion of the President, should encourage employers to raise the level of salaries of their employees.

Currently, the rate of 15% is established by Russian national legislation and applies if there is no Double tax treaty (DTT) with the country to which the income is paid. Under the terms of such DTTs with the majority of countries, depending on various conditions, the rate of 5% or 10% is applied. The change announced by the President will require changes to the existing DTTs. At the same time, it was noted that if foreign countries do not cooperate with Russia, Russia will unilaterally withdraw from the treaty.

Please note that the process of introduction of changes to the agreements concluded at the international level is a very long process, usually taking up to 2 years.

However, this statement may have a negative impact on the investment climate in Russia. The measure was announced as aimed at combating offshore schemes, when money is withdrawn abroad and transferred to the accounts of individuals without payment of taxes or with payment of the minimum tax of 2%. However, Prime Minister of Russia Mikhail Mischustin has already instructed The Ministry of Finance to revise existing DTTs.

For citizens whose total amount of bank deposits or investments in debt securities exceeds 1 mln rubles, interest income will be recognized as taxable income, the rate will be 13%

Currently, such income is not subject to taxation. The introduction of this measure is due to the fact that the state will need financing to implement the rest of the measures which were announced. The measure will require amendments to the Tax Code of the Russian Federation and, in our opinion, may be introduced not earlier than 2021, as the law worsening the situation of taxpayers cannot have a retroactive effect.

SCHNEIDER GROUP is not only actively monitoring the situation, but also taking part in the discussion of proposals in this area by businesses. We will continue to inform you about news in this area.

Employees of SCHEIDER GROUP’s tax practice are ready to consult you on the application and implementation of measures aimed at supporting the economy in conditions of coronavirus infection spread.