Tax reconstruction: the position of the courts and the Ministry of Finance and their difference in approaches 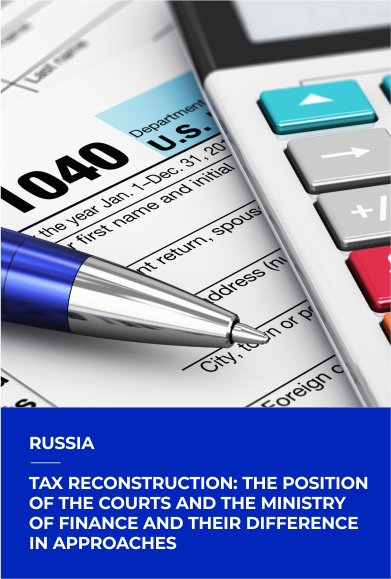 Until recently, arbitration practice considering tax disputes taking into consideration for the possibility of tax reconstruction in a situation where the tax authorities challenged deductability of the expenses paid to a dishonest contractor.

Previously, by refusing deduction of expenses paid to an unfair counterparty, both tax and court practice recognized the possibility to take into consideration these expenses when calculating the taxable base of the company in the amount of actually incurred expenses. This process is called tax reconstruction. The purpose of tax reconstruction is to identify the real economic effect of the transactions, if the reality of the economic transaction is provenbut, expenses were overstated by the inclusion of an unfair counterparty into the process of supply of goods (performance of work, provision of services).

Position of the Russian Ministry of Finance

The Ministry of Finance of the Russian Federation issued a letter dated 13.12.2019 No. 01-03-11/97904, in which it expressed its opinion that due to the emergence of a new provision in the Russian Tax Code in 2017, (namely Art. 54.1 of the RussiaTax Code, which establishes the limits of the taxpayer’s tax rights) tax reconstruction as previously understood is no longer possible. In the opinion of the Ministry of Finance, the provisions introduced in 2017 prohibit distortion of tax accounting and prescribe the execution of the transaction only by the companiess directly stated in contract as a contracting party or other person or legal entity on the basis of a contract.

Against this background, the judicial practice that is currently taking shape is contradictory. Thus, in the case of the KuzbasskonservmolokoCompany, the court of first instance sided with the taxpayer, while the court of second instance cancelled this decision and made a decision in favor of the tax authorities, indicating that tax reconstruction is not possible.

In another case, SIVA Les, the courts of first and second instance supported the tax authorities, stating that tax reconstruction and accounting of actually incurred expenses is not possible if the requirements of Article 54.1. of the Tax Code are not met. However, in January 2020, the court of cassation cancelled court acts of the first two instances in its resolution and sent the case for a new consideration, indicating that there is no prohibition of tax reconstruction using a calculation method in the norm of Article 54.1 of the Russian Tax Code.

We hope that in 2020 the court practice will develop a unified approach to this issue and will return to the previous direction, when the possibility of tax reconstruction was recognized by both the courts and the tax authorities. We will closely follow the developments.

In case of additional questions regarding the practice of working with unfair counterparties and emerging risks, our tax experts are ready to help you secure your business taking into account the latest trends in this area.