Russia introduces a new mechanism to protect and encourage investment 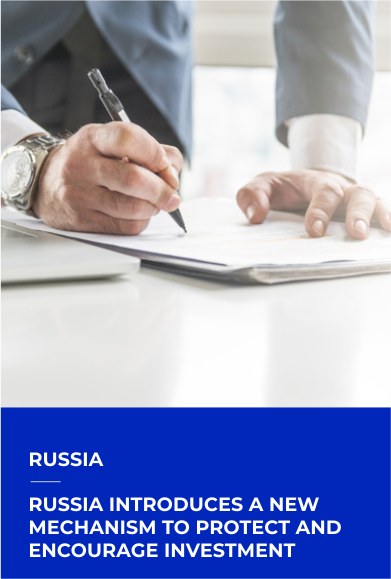 On April 1, 2020, the long-awaited Federal Law No. 69-FZ of April 1, 2020 “On the Protection and Promotion of Investments in the Russian Federation” came into force. (“Act No. 69-FZ”) (we have previously analysed the provisions of the relevant draft law).

At the stage of submitting the draft Law No. 69-FZ to the State Duma for consideration, it was assumed that the Law No. 69-FZ would replace most of the outdated acts in the sphere of investment activity in the Russian Federation and become the new basic law in the sphere of its regulation. However, as a result of consideration by legislators, the draft law was substantially redrafted and some of the proposed amendments were removed.  For example, a whole set of measures was envisaged to systematize and control the provision of state support, from which only the proposal to create a single register of state support measures was preserved.

The Law introduces a new mechanism for concluding agreements on protection and promotion of capital investments (SZPK), which should provide certain guarantees and stability of the legal regime for the implementation of such projects in exchange for investment. In particular, depending on the amount of investment, the following benefits and/or guarantees may be provided in the SZPK for an investment project:

Agreements on protection and promotion of capital investments may be concluded between private entities – Russian investors and public entities (on the part of which the subjects of the Russian Federation act, in the territory of which the investment project is to be implemented). In some cases, the Russian Federation and/or municipal entities may also take part in an agreement on the public side.

SZPK may be concluded for investment projects aimed at creation (reconstruction, modernization) and operation of immovable property objects or complexes of immovable and movable property objects connected with each other, as well as for projects aimed at creation and use of intellectual activity results and/or individualization means. SZPK may be concluded in various sectors of the economy (including healthcare, education, culture, physical culture and sports, digital economy, ecology, agriculture, and others).

SZPKs are a temporary measure of investment activity stimulation – it is stipulated that such agreements may be concluded until January 1, 2030.

The full-fledged operation of Law No. 69-FZ and the conclusion of the SZPK will in practice require the adoption of a significant number of by-laws both at the federal and regional levels.