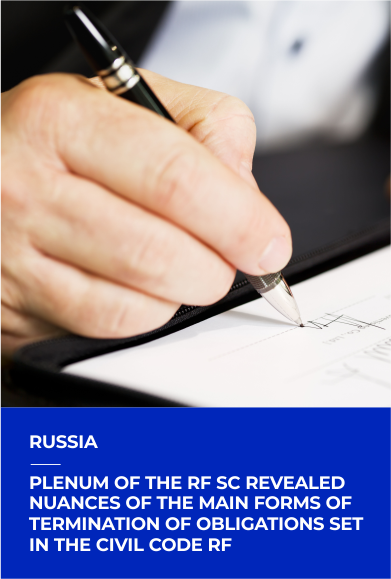 At the same time, in order to ensure the unity of law enforcement practice, the RF SC clarified the most common ways of terminating obligations.

Also, the RF SC clarifies that if different requirements for the form are established with respect to the initial contract and the compensation agreement, then the most stringent of these rules on the form of the transaction are applied to the agreement on compensation.

It should be noted that if real estate is transferred as compensation, but the debtor evades the registration of transfer of this ownership, the creditor has the right to demand such registration.

The expiration of the limitation period for the initial obligation does not preclude the conclusion of a compensation agreement. Such an agreement, depending on its content, may be qualified as debt recognition.

After the offset, the parties should be in the same position as if both obligations were terminated by fulfillment. However, for the offset on the active claim, the deadline for fulfillment must pass, which is not a prerequisite for the passive claim and can be fulfilled ahead of schedule.

In addition, the RF SC clarified that in cases provided for by law or by agreement, offset is possible regarding claims that are not counterclaims.

The requirement of uniformity must be followed at the time of the offset, but it is not mandatory at the time when the offset obligations arise.

If a person was in arrears in fulfilling an offset obligation, the fulfillment date for which had come earlier, then the interest for using money and (or) a penalty is charged until the obligation is terminated by the offset. If interest for the use of money and (or) a penalty was paid for the period from the moment when the offset is deemed to have taken place,  until the declaration of will of the statement for the offset, it shall be returned.

The RF SC clarifies that the initial obligation is terminated upon conclusion of an agreement on novation, and not upon the actual fulfillment of a new obligation, as happens with compensation.

If a guarantee was issued or a pledge was provided by a person who is not a debtor of this obligation to guarantee the initial obligation, then as a result of novation, these guarantees are terminated, except for the cases when the surety or the pledger directly agreed to keep them, including in advance, before concluding the agreement on novation.

Debt forgiveness is a two-way deal, i.e., for its completion, the consent of the debtor is necessary. If the debtor objects, then the forgiveness may be declared not held.

For debt forgiveness, the maturity or conditions for obligation fulfillment do not matter.

If it is not possible to establish the will of the parties regarding the partial termination of the obligation, it is considered that the obligation is terminated completely, and additional requirements, including the requirement to pay a penalty, are also terminated.

The occurrence of force majeure circumstances does not in itself terminate the obligation of the debtor, but the party is exempt from the recovery of losses or penalty payment to the other party as well as other sanctions caused by the delay in performance of the obligation due to force majeure.

Provisions on certain types of agreements may provide for special rules on the consequences of the impossibility of fulfilling an obligation and on the moment of transfer of risks on its occurrence.

Liquidation of a legal entity

The participants of the liquidated legal entity, as well as its creditors, are not entitled to independently address the obligatory requirements of the legal entity to its debtors, in particular with the requirement to return the property transferred for rent, to pay the cost of the transferred goods, etc. In this case, one should be guided by the provisions of the RF CC on the distribution of the discovered obligatory claim.