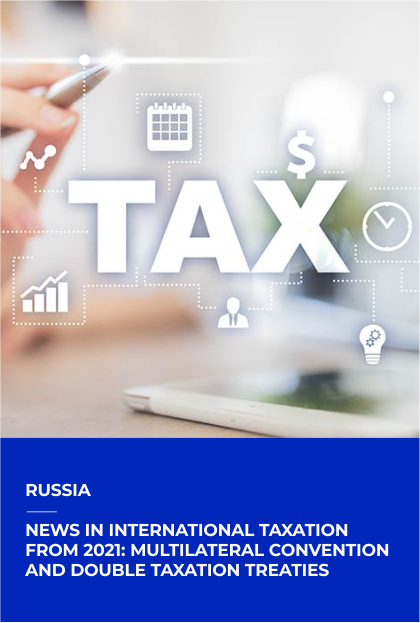 Starting on 01.01.2021, Russia  applied the Multilateral Convention of 24.11.2016 on the implementation of measures related to tax treaties in order to counter the erosion of the tax base and the withdrawal of profits from taxation (Base Erosion and Profit Shifting – BEPS) (in international practice – Multilateral Instrument, “MLI”, “Convention”). Amendments to a number of Double Taxation Treaties (“DTT”) will also come into force.

Russia has completed internal procedures for the entry into force of the MLI norms, and from 01.01.2021 the Convention has entered into force in regard to 34 countries, subject to a number of restrictions. You can find out about the main changes in our review.

There are also changes in DTTs with a number of countries, namely Cyprus, Luxembourg, Malta, and the Netherlands. These jurisdictions are traditionally used to transfer income earned in Russia abroad. During a teleconference on 25.03.2020, the President of the Russian Federation, Vladimir Putin, announced the need to revise the DTTs with these jurisdictions.

The proposed changes concern the increasing of the withholding tax to 15% for dividends and interest, with some exceptions. The changes do not affect license fees (royalties) and a number of other payments.

A 5% beneficial rate for dividends will be preserved for the following categories of income recipients, beneficial owners of income:

Interest payments on loans will be taxed at a 5% rate, if the income recipient, being the beneficial owner, is a bank or falls in one of the above mentioned categories, including publicly listed companies.

The reduced rate also applies to income paid on the following classes of securities traded on a registered stock exchange:

Entry into force of the changes

Thus, from 01.01.2021, the application of privileges under the DTT with 34 countries  is possible only if the MLI conditions are met. At the same time, the privileges with Cyprus and Malta (the Protocol is temporarily applied, despite the fact that it has not been ratified yet) are applied to a limited extent, taking into account the changes introduced by the protocols and the MLI. The changes to the DTT with Luxembourg will come into force not earlier than 2022, if all national ratification procedures are completed during this year.

For the rest of the countries, including Luxembourg, the current version of the DTT applies. Changes to the DTT with the Netherlands, if any, will take effect no earlier than 2022.

We are tracking the development of events and will inform you in a timely manner. Tax practice experts will be able to advise you on emerging issues. In our opinion, at this stage it is advisable: