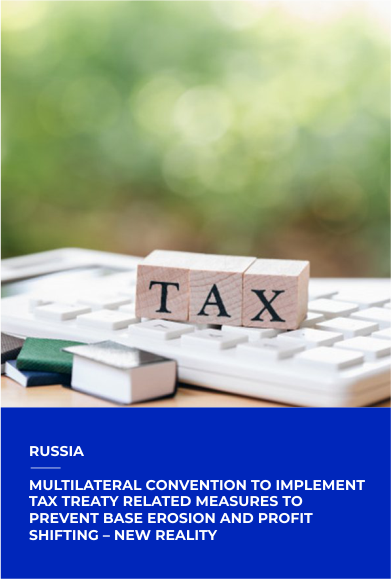 On 06.05.2020 The Ministry of Finance of the Russian Federation has published on its website a message[1] about the beginning of the application of the Multilateral Convention to Implement Tax Treaty Related Measures to Prevent Base Erosion and Profit Shifting of November 24, 2016 (“MLI”)  from January 1st, 2021.

The adoption of the MLI combats tax evasion and abuse of tax benefits granted under double taxation treaties (“DTT”). The Convention was developed by the Organization for Economic Cooperation and Development (“OECD”).

The Russian government has signed the MLI back in June 2017. Ratification has taken place in May 2019.  Among the other countries that signed the MLI are Cyprus, Luxembourg, Switzerland, Austria, the United Kingdom, the Netherlands, and other jurisdictions frequently used for international tax structures It should be noted that Russia has not included the DTTs with Switzerland, Germany, Sweden and some other countries in the list of countries to which Russia plans to apply the MLI. This means that DDT with these countries will not be changed. The full list of countries with which Russia plans to apply MLI mentioned in the Law about ratification of MLI.

Thanks to the MLI, it has become possible to amend existing DTTs. The member states of MLI (“Member States”) may choose the set of articles of the MLI which will be applied to the relationships between them on a bilateral basis. However, there is also a mandatory standard to which all Member States must adhere. These are the provisions for which the MLI was created, such as provisions on the avoidance of the abuse of DTTs and on dispute settlement. When signing the MLI, Russia chose the widest standard and will use all the possibilities provided by the MLI.

Previously, the principle of a “business purpose” in a transaction was not enshrined by Russian national laws, but it was formed at the level of Russian judicial practice and was actually applied by Russian tax authorities and courts. Thus, this concept is not new to the Russian law enforcement practice.

The optional provisions apply if two Member States have agreed on their application to the relationship between them.

Application of preferential rates for dividends (applicable to DTT of Russia, in particular, with Argentina, Armenia, Cyprus, the Netherlands, Hong Kong, Luxembourg and Singapore)

The national legislation of the countries establishes a certain tax rate. At the same time, the reduced tax rate is usually provided for by the DTT if the recipient of the dividend provides documents confirming that it is a tax resident of the DTT member state.

Prior to MLI application: the conditions for applying the reduced rate had to be met on the date of payment.

Restrictions on the alienation of shares in real estate owning companies (applicable to DTT of Russia, in particular, with Netherlands, Singapore and Austria)

Prior to MLI application: this restriction was established at the level of national legislation of Russia. Most DTTs did not have such a provision, and therefore this provision was rarely applied, mostly when there was no DTT.

Under MLI rules: income from the sale of shares (stakes) in Russian companies, the assets of which consist by more than 50% of Russian real estate are subject to Russian taxation, regardless of any exemption of the income from taxation under an applicable DTT. The share of real estate in the total assets of the company whose shares were sold will be determined for each of the 365 days preceding the sale of shares.

Permanent establishment and dependent agent (applicable to DTT of Russia, in particular, with France, Argentina and Armenia)

Prior to MLI application: the provisions on the dependent agent have been applied in the past on the basis of both the national legislation of the Russian Federation and the majority of Russia’s DTTs. The dependent agent concept consists in recognition of the fact that foreign company has a permanent establishment if acts on the territory of the other country through the person which do not provide agent or representative service on professional basis.

Under MLI rules: the MLI provides that, if an agent systematically enters into contracts on behalf of a foreign company, and, providing representative services usually enters into contracts, such activity is the activity of a dependent agent and results in the formation of a permanent establishment of the relevant foreign company and such foreign company’s obligation to pay tax in the country where the agent with dependent status operates. This rule does not apply to agents with independent status who act in the ordinary course of their business, whether as a commission, brokerage, or agency. As I mentioned above this rule is now applied in most DDT.

Prior to MLI Application: auxiliary and preparatory activities (the list of which was determined by the RF Tax Code and DTT) did not lead to permanent establishment.

The construction site’s activities led to permanent establishment if it continued for a certain period of time as specified in the DTT (usually 6 or 12 months).

Under MLI Rules: the rule that preparatory and auxiliary activities do not lead to permanent establishment will be abolished.

The existing rules regarding the qualification of construction activities for the creation of a permanent establishment continue to apply. However, the splitting of a long-term agreement exceeding the relevant time limits into several agreements each does not exceed the time limits is now prohibited.

How will DTTs be applied now?

In addition to the analysis of domestic tax legislation in force in bilateral DTTs, further tax planning will also require analysing the provisions of the MLI.

Entry into force of the Convention

The message on the website of the Ministry of Finance of the Russian Federation contains the following list of countries that will be covered by the MLI from 01.01. 2021:

SCHNEIDER GROUP will be able to advise you on the application of the DTT after the entry into force of the MLI. If potential risks are identified through the analysis, we can offer options to address them.

In our opinion, at this stage it is advisable to: