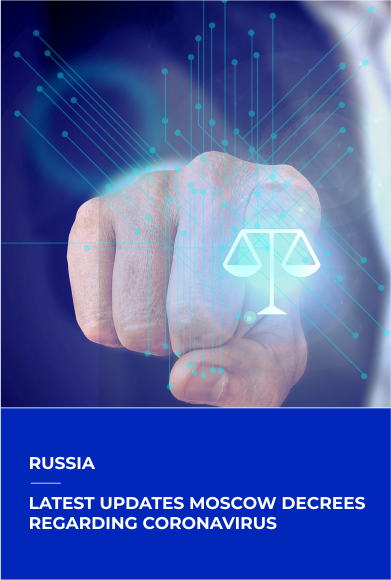 On March 25th the Moscow Mayor has issued an addition extending restrictive measures on personal attendance of people at public places without limitations of their number (previously – maximum 50 people could gather). The list of such public places is open and includes, for instance, the following:

The decree also suspends the deployment of any mass cultural, entertainment and any other kinds of leisure events.

The new restrictions include also the following:

The main updates are as follows:

The self-isolation regime may not apply to the management of companies and employees of the enterprises, organizations, authorities and the state bodies whose presence at work is critical to ensure their functioning. The same exception applies to the workforce of the healthcare system as well as those persons, who are determined by the Moscow headquarter on arrangements for prevention of the coronavirus spreading. However, this decree does not specify, which concrete persons are not subject to limitations.

According to the Moscow Major Decree those employees, who returned from countries with an unfavorable corona virus infection situation (49 countries) have to self-isolate for at least 14 calendar days.

According to a Decree of the Chief Sanitary Officer of the Russian Federation of March 19, 2020 (“Sanitary Officer Decree”), however, anyone returning from abroad to Russia (regardless which country) needs to self-isolate for 14 calendar days.

According to information received from the official Hotline and from mass media, this apparent conflict with the Sanitary Officer Decree is resolved in a way that Moscow authorities issue medical certificates only for persons returning from the countries indicated in the Moscow Major Decree. Whoever returns from another country needs to find a mutual agreement with his/her employer on being exempted from physical attendance at work. This is an obvious dilemma between mandatory self-isolation at home according to the Sanitary Officer Decree and the obligation to show up at work according to employment relations (if such employee has not been transferred yet to a remote work regime).

Citizens of CIS countries, Republic of Abkhazia and Republic of South Osetia can freely come to Russia and leave it through air checkpoints and other checkpoints while going to their countries of citizenship by other means of transportation.

The State Duma also proposed more severe criminal penalties, if a non-isolation of the affected person leads to a threat of mass infection and/or death of people, the penalty maybe up to 5-year freedom’s limitation. If such violation leads to death of two or more people – imprisonment of up to 7 years.

The courts are currently postponing the hearings to the substantial extend in all other categories of cases scheduled for the period up to April 10, 2020.