Abolition of most repatriation requirements for foreign trade contracts 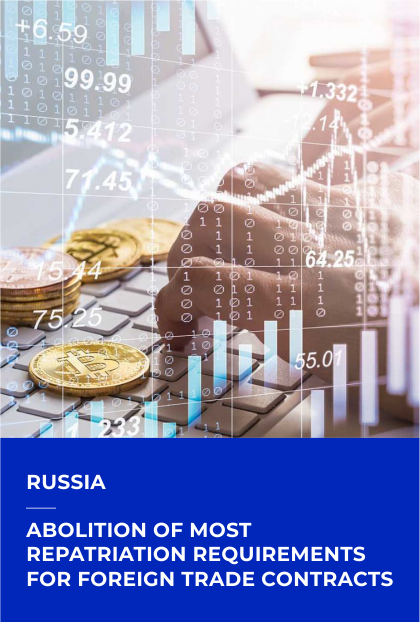 On 28.06.2021 Federal Law N 223-FZ “On Amendments to the Federal Law “On Currency Regulation and Currency Control” was adopted, which abolished most repatriation requirements. The law entered into force on 01.07.2021.

Essence of the changes

In addition, residents are allowed to credit revenue on their foreign accounts.

Reminder: the abolition of repatriation for fully rouble contracts (debt currency and payment currency – roubles) was previously introduced from 01.01.2020, as we wrote about here.

It is important to note that certain repatriation requirements are still relevant for the following cases:

Reminder: fines for non-repatriation were previously significantly reduced, as we wrote about here.

Entry of the law into force

The abolition of repatriation will affect new contracts as well as contracts concluded before 01.07.2021, if payment obligations in foreign currency under them have not been fulfilled.

What these changes mean for business

The introduction of these amendments opens up the possibility of renegotiating existing obligations with foreign counterparties, which can now be terminated by offsetting of mutual claims. Other methods of termination of obligations under civil law may also be used.

SCHNEIDER GROUP experts are ready to analyze your existing contracts for the presence or absence of repatriation requirements arising from them. We can also choose suitable restructuring strategies for your company’s foreign trade contract debts, as the removal of existing restrictions provides new opportunities for the business.